Robert Cutforth reports back from the Northern Lights Writers Conference at Sale Waterside, where he has an unsettling encounter with Will Self…

The Northern Lights Writers Conference starts pleasantly enough with writers Joanna Kavenna and Jo Bell discussing the difficulties in extracting money from people who ask us to write something for them. It’s tough out there, new writers, but not impossible. You simply need to lower your expectations, be willing to make an arse of yourself and do the odd bit of lecturing or burger flipping to avoid the breadline. It’s a bitter pill for most prospective writers with JK Rowling-style delusions of glory to swallow, but it is very useful advice and delivered with a “hey, we’re all in it together” kind of spirit that leaves us with a modicum of hope.

And then a man who is clearly undead wafts onto the stage.

I don’t mean the gaunt, altitudinous figure before us is a vampire in the metaphorical sense, no. It took me precisely one second to determine with extreme certainty that this man spends his days sleeping in a coffin and his nights flying above the streets of Whitby looking for living things to eat. Behold, William Woodard Self, the destroyer of worlds.

He begins his talk by asking genre fiction writers to identify themselves. Proud hands go up. Having read some of Self’s fiction beforehand, I suspect it would be unwise to raise my hand despite the fact I’m writing my second novel that just happens to have post-apocalyptic Manchester as its setting. I am right to be suspicious. “I have nothing to say to you,” he says and snaps his fingers. The fools with their hands aloft vanish in puffs of foul smelling smoke.

For the stunned few of us who are left, he has some practical advice: Ostinato Rigore which he says means “constant rigor” but I am pretty sure is some sort of spell. He elaborates. Ostinato Rigore in the writerly sense means to keep busy. Write anything and everything you can, especially when first starting out. He proves his devotion to Ostinato Rigore by regaling us with tales of his early days writing questions for pornographic board games and ghostwriting Ronnie Biggs’ joke book. I laugh and allow a single buttcheek to unclench. 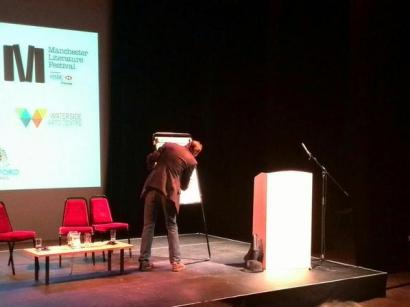 Sensing we are warming to him a bit too much, Self shakes a bat out of his cloak, draws a graph on a whiteboard that illustrates his tumbling sales figures and proclaims the death of the novel as an art form is nigh. I re-clench.

A woman asks him what a young writer is to do if their chosen vocation is indeed on the brink of extinction. “I would look into a different medium,” he says and produces a flawless human femur from his back pocket. With a flick of his wrist, the femur hurtles through the air and finds purchase in her left eye socket with a distinct ker-chunk. Self blows a disinterested raspberry into the microphone as her head rolls down the stairs.

After lunch, he reads a particularly cheery excerpt from his new book, Shark, that centres on a delirious sailor as he floats amongst the wreckage of the USS Indianapolis with his dying comrades. While singing an American folk song, the protagonist unlatches another sailor’s life jacket and watches the boy slowly disappear into the shark-infested deep.

A journalism student accidentally misquotes Self whilst asking a question. Before the last word leaves his lips, Self leaps from the stage and promptly chainsaws the student into bite-sized pieces and stuffs them down his throat one after the other. His jagged Adam’s apple jumps and clicks with each gulp gulp gulp. As he dabs the chunks of bloody student from the corners of his mouth with a silken hanky, he suggests aspiring journalists should perhaps get their facts straight before asking stupid questions.

Trembling and suffering from a debilitating case of Stockholm Syndrome, I approach the man afterward and ask him to autograph my copy of Shark. To break the icy stillness that descends as he scratches his name onto the title page in phlegm, I ask his opinion on MAs in Creative Writing. He has already implied that the genre in which I write is silly and that long form fiction in general is toast, so why not go for the trifecta and have him ravage my academic choices as well?

He arises from his seat, takes me in his arms and twirls me about the room. A tuxedoed string quartet appears from behind the bar, playing The Blue Danube. The floor falls away and everyone but us plummets screaming into a pit of fire. Faster he spins me above the flames, his terrible eyes focussed on something out the window, his terrible mouth tutting my crap waltzing technique. “Come on, man, one two three, one two three…” I am terrified and enraptured in equal measure.

As the fire snuffs out the cellist’s final note, Self dips me. “An MA in Creative Writing is a waste of time,” he says and brings my face so close to his that I expect to feel his hot breath, but there is none. “Stretch yourself by getting a proper degree, like philosophy” and plunges his fangs into my neck.